Someone who read my blog post about my recent divorce and the verbal and emotional abuse that led to it said that there was a kind of “hole” in the narrative.

He said that while the piece illuminated a lot of things about my situation, it sidestepped the actual experience of the abuse. He’s right. I did this on purpose, because I know both from the complexity of my unfolding recovery and my time in the writing business that these stories aren’t finished in a few thousand words. You can’t tell it all at once.

By a quick count, not including many people who discussed it in public forums including social media and the comment thread on the blog, about twenty people wrote me messages right around the time I published that post, and about half of those people said they had experienced some kind of abuse in their own partnerships or families.

They’re all extended family members, friends, acquaintances, or friends of friends. In all but one of the cases, I had had no idea that the person had been through an abusive relationship.

Is this a scientifically selected, controlled, and replicable sample? No. Are we now going to talk about the official statistics of abuse in America perpetrated by partners or family members? No. I’ll save that for a broader, more journalistic endeavor.

I’m still healing and there are things I’m not ready to tell, and judging from my experience so far, there are things I’ve suppressed whose effects I’m not even aware of yet. So of course there are holes in the story. But now I have a new sense of the urgency of telling what there is to tell, even if I can’t define exactly why yet — it could be that more people need to understand the realities of abuse; it could be that people who have experienced abuse benefit from reading versions of their own story. It could be people like me: I didn’t realize what was happening in my own life until I read what other people had written about it, and recognized the patterns there as surely as you recognize the symptoms of a disease or injury that goes undiagnosed for a long time, and is suddenly pinpointed by a perceptive doctor.

People who have not experienced the dynamics of severe emotional manipulation by a partner, once they hear what happened in my life, often ask why it took me so long to realize what was happening, and leave. I’m a smart girl, aren’t I?

The reasons behind that could be a whole book. A whole shelf of books. They already are. All I’ll try to say about that right now is that when you’re in an abusive relationship, including emotional and verbal abuse, you might feel like the fence that is stuck in this tree. 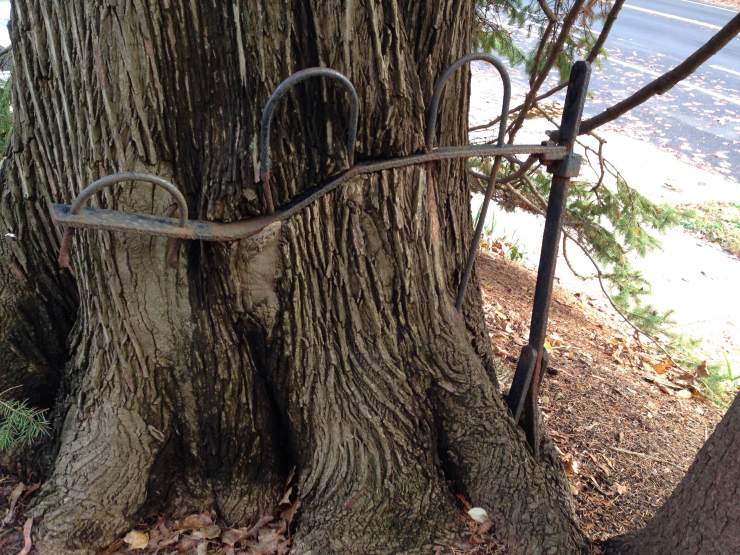 I also feel like it’s important to say here that in my experience, a lot of people define the breaking point of an abusive relationship — or the point at which you are truly justified in leaving — as the day the perpetrator’s behavior becomes physically threatening. But extricating yourself and healing from a toxic relationship that leaves no physical marks can be just as terrifying, if not more so, than fleeing a physically abusive relationship. The often invisible, intermittent nature of verbal or emotional abuse makes it all the harder to define and admit — and all the easier for the abuser to continue hiding his or her behavior from the world.

What does verbal or emotional abuse look or sound like? The stories other people have recently told me are their own. But if there’s a hole in my original narrative about the divorce, maybe I can begin to fill it by explaining what it’s like to be afraid of going to the doctor with your spouse.

You worry because the way your spouse behaves when other people are present is not the same way he behaves when alone with you. Quiet, respectful behavior in front of a doctor or others is later transformed into acid frustrations at your failure to achieve full mental or physical health (“You know you’re going to fuck up my kids, right?” or “if I’d known you were going to get this sick, I never would have married you.”). Sometimes you’ve invited your spouse to accompany you to doctor or therapy appointments in hopes that it’ll help him get a better understanding of your illnesses, and be kinder about them at home, but your spouse usually expresses no interest in going.

So when your spouse is driving you to the doctor one morning and you mention that you’d prefer to see the doctor privately, you’re a little nervous, because the things you ask for somehow have a way of turning out to be exactly what your spouse hates to give, but you think it won’t be too big a deal because of the number of times he has shrugged at the chance to go with you.

But you’re wrong today. While looking for a parking spot at the medical complex, your spouse suddenly becomes furious. Other family members have accompanied you to the doctor — why not him? He should be the most important person in your life, privy to everything before anyone else. What are you hiding?

You apologize and backpedal and apologize and say he’s right and it’s fine for him to come into the appointment after all (anything to make the shouting and cursing stop before you get out of the car). Your spouse does stop yelling when the doors open, but refuses to come to the appointment after all, and broods in the waiting room. You walk into the consulting room feeling exhausted and bruised and guilty, blinking back tears.

For your birthday, your spouse gives you a pair of tickets to see one of your favorite performers, leaving them on your pillow for you to find. You’re touched and delighted. The afternoon of the show, while you’re resting up for the evening, your spouse sits on the couch with you for a long time and dispassionately explains how he never would have married you if he had known your health problems would become so severe — in fact, because you used to be healthier, you’re a liar and you tricked him into a marriage no man would want. Just admit that you’re a liar. A sick wife and a liar. Your desperate guilt and misery rise and rise until you can’t hold back your tears. He says to stop trying to shut down the conversation — that’s all it is, a simple conversation anyone should be able to have — and manipulate him by crying, the way women always do.

You regain your composure in time to go out, but you feel so raw on the inside that it shows, and your spouse gets irritated because you’re not having enough fun. Afterwards, he says your bad attitude ruined the night.

There are resources to help people who are experiencing this kind of behavior. But the bottom line I would offer, for now, is to pay attention to whether someone always makes you feel like what you’re doing and saying is wrong.

Over time, this pattern goes deep. In my case, it extended all the way into avoiding cooking, typing, brushing my teeth, washing my face, or brushing my hair while my ex was in the room, because he would often find something wrong with the way I was doing these things: I scrubbed my face too vigorously, I brushed my hair too fast, I typed too loudly, that is not the right way to cook an egg.

My dread must have shown. Sometimes he’d watch me silently for long minutes, with crossed arms and narrowed eyes.

“Why are you looking at me like I’m some abusive husband?” he’d demand at last. “How do you think it makes me feel when you look at me like that?”

“Then I don’t know why you’re looking at me like that. I would never hurt you.”

One night something about the way I was cooking dinner suddenly made him furious. He began shouting in my face, fingers jabbing my collarbone. I asked him not to yell at me. He said he needed to yell to make his point and he was entitled to talk to me in whatever way was necessary for him to be understood as my husband. I felt the kitchen towel rack against my back. I was cornered between the wall and the hot stove. I was so startled, I remember the big plastic ketchup bottle dropping out of my hands and hitting the floor.

So what’s the point?

Poor, poor me? Look what I’VE been through?

The point is that what happened to me is happening and has happened to people all around you, whose partners seem friendly, engaging, and loving in public. It seems so prevalent, once you peel back the secrecy and fear, that I’m fighting with myself about whether to believe that abusive behavior, from people of all genders, is simply human nature and some of us are just bound get caught up in it.

I don’t want to believe that.

Talking about the problem more may not prevent abusers from wreaking their havoc (in their own conscious or unconscious layers of trauma, pain, malice, or desire for control), but it may help their victims recognize what’s happening, and get out. I wish I could speak to abusers too: that maybe they’d read this, recognize themselves, and work to change. Unfortunately, while it’s not impossible, this kind of self-awareness and desire to halt toxic behavior is rare for people who are already engaging in abuse.

If you haven’t experienced this treatment, someone you love probably has, whether or not you know about it. You’ve read the beginnings of my story. Can you listen to others’? Can you tell your own? And throw the lights on a safer space for everyone?