Unfortunately for me, my physical therapist practices in the same building as a CrossFit. Lava injections could not be more painful than the post-op manual therapy I have been prescribed, but to make things worse, I have to crutch past some kind of CrossFit Ten Commandments billboard every time I go.

I know a little more about CrossFit now than I used to: very ripped people hang from bars and grunt louder than copulating elephants.

“I like it when the girls are in here on Tuesday morning,” one of my fellow PT patients remarked. “There’s two of ’em could whup us all.”

CrossFit is, apparently, more than a workout choice. It is a Lifestyle, as the tenet above illustrates. Limping past slogans like this on my crutches, at a time when I have to take a nap after the supreme effort of getting a shower, I hear the trumpet of an absurd kind of privilege: the privilege of a healthy body that can choose to go in search of pain and pay for the experience.

Do CrossFit devotees embrace such terrifying workouts, and measure the worth of their workout by the depth of their fear, because they don’t face enough real-life challenges?

“I will pick a fight with every challenge that comes my way. I will battle until I achieve success and then look for my next opponent,” the CrossFit wall reads. I wonder what would happen if all the country’s CrossFit acolytes devoted the same fervor to, say, civil rights or childhood hunger?

But let’s get the focus back on me. I wonder if fighting your way back from having your hip and pelvis sliced open, rearranged, and stitched back together is really any harder than a month of CrossFit. You want a challenge? Get on your crutches every single time you have to go to the bathroom. Watch your cousin’s one-year-old daughter take the stairs much faster than you can.

After my surgeries, I thought it didn’t get any sexier than this full-coverage Velcro hip brace:

And then I went grocery shopping in crutches:

That is to say, I gimped around the store pointing at things I couldn’t lift while my friend put them in the cart for me.  And I was so exhausted I felt sick to my stomach.

I would like to think that deep down inside, I can relate to the CrossFit dare, because there are a hell of a lot of things you can’t do while you’re on crutches, and yet I persevere. Jokes like not being able to walk and chew gum at the same time take on a rather painful cast as you realize just how much multitasking we do while walking. You want a challenge? Remember that you can’t walk and hold anything at the same time. Fortunately, I’m a curvaceous woman and there is room in my bra for items including but not limited to cell phones, keys, medicine bottles, and post-operative paperwork.

However, in the CrossFit spirit of demolishing life’s physical challenges, I’ve decided to focus on the things you CAN do with crutches:

3. Push shit out of the way when you’re trying to walk.

6) Pick up yesterday’s sports bra. No, not for CrossFit. I’m just going for maximum comfort these days.

7.  Get a spurious sense of self-sufficiency and independence.  There were a few weeks where my caregivers would deliberately lean my crutches against the wall, a few feet away. This was because I was not allowed to attempt standing up by myself, and I could not stand up by myself, but am I dumb enough to try something like that. But one night, someone left the crutches leaning on my bedside table, within my reach. This is the kind of excitement crutches can afford you. Suddenly, you’re able to stand up by yourself, maybe walk down the hallway a bit, and if you’re feeling really ambitious, put your pants on all by yourself.

8) Get outside and take a closer look at slugs. ‘Nuff said.

9) Grasp your last link to the outside world. When no-one is home, your iPhone is almost dead, and you can’t bend over, you better figure out a way to pick up that cord. 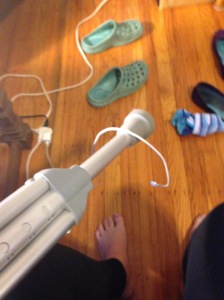 10) Get artistic inspiration. One day, your friend will bring you bagfuls of craft supplies for your own entertainment, and faced with endless possibilities, you will fashion a tiny pair of crutches out of pipe cleaners. GET ME OUT OF HERE.

I don’t want to be too sanguine about crutches. Remember when your friend in elementary school broke his ankle and everyone was begging to try out his crutches? Yeah, well it’s not so fun now. My neck and shoulders are in knots, the heels of my hands are sore, and if I so much as look at a single stair in a public place, people stop to ask if I’m OK.  It’s amazing how long you can put off going pee when you have to go to the bathroom on crutches.

There are many things you can do with crutches. Like take a shower, in a flat-bottomed stall with the end of the crutch jammed against the corner tiles so you won’t slip. But, genius that I am, I’m here to say that you better lather up that washcloth first thing, because you cannot, cannot, cannot  pick up the soap with crutches once you drop it.

Or your little green pill.