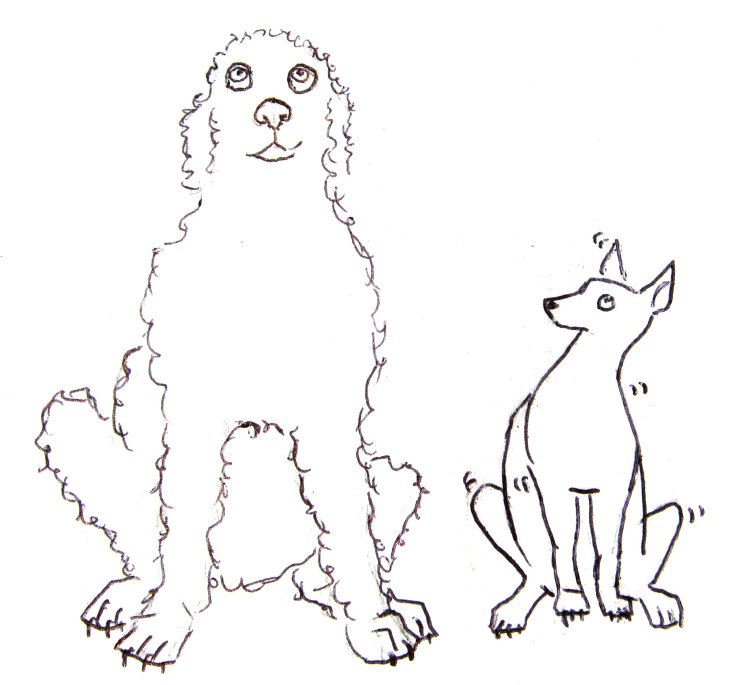 Java and Dexter, my aunt’s dogs, an excitable cocker spaniel/poodle mix and a trembling, devoted Jack Russell Terrier, trained their gaze on my uncle with the focus of weapons guidance systems.

He was making himself a bowl of sliced strawberries.

“I wonder why they think they want strawberries,” I said.

“Now, see, the problem right there is that you’re assuming they think at all,” my uncle replied. Though he loves his dogs, he apparently doesn’t set a great store by canine intelligence.

But my uncle is wrong.

Of course I’m not the first person to allege that dogs can think. One of my favorite books as a kid was a paperback about dog heroes: dogs defended their families from poisonous snakes, woke up sleeping parents in the face of fire, and dragged their injured humans from freezing lakes and gravel pits.

Or take the story circulating the internet this week: a mother dog pulls her 10-day-old puppies from a house-fire, and piles them right into a nearby fire-truck.

Are these not the actions of a clever species? This is not to mention the work of service dogs, military dogs, cancer and bomb and drug-sniffing dogs, dogs that herd your livestock and dogs that comfort you when you cry. 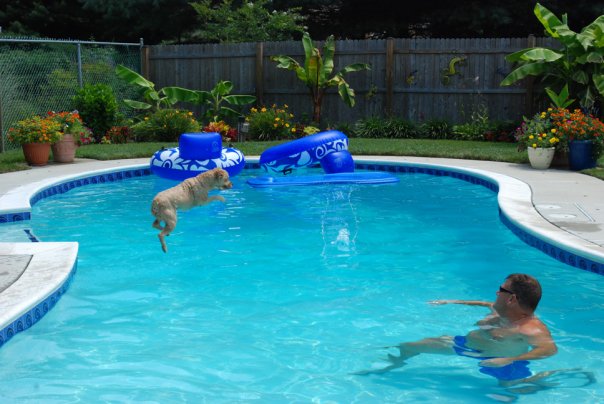 Here is a dog who knows how to have fun. (Photo credit Johanna Austin.)

He showed his smarts early on by learning to leap onto the back of the couch and touch his nose to my dad’s buck trophy on the living room wall when someone asks “where’s the deer?”

Later, he expanded his repertoire to running to the goldfish tank when someone asks “where’s the fishies?”

But one night he blew it all out of the water.

My mom was home alone late at night, and Cuda began to bark frantically at the front door. Mom peeked out the windows and could see nothing, but Cuda wouldn’t calm down. Finally, unbidden, he leapt to touch the deer trophy.

What was he trying to say?

Mom looked outside again, and on her second try, she discovered a herd of deer crossing the driveway.

To Mom, the episode settled a long-running dispute we’ve had about the depth of Cuda’s smarts – I maintained that he has no idea what a “deer” is and had merely responded over time to positive reinforcement when he approached the trophy. Now, Mom can claim that Cuda’s mental abilities extend to the communication of fully-formed abstract reasoning.

Deer are trespassing outside. Mommy doesn’t know they’re there. There is a deer right there on the wall. Since I am unable to alert her to the presence of deer outside through noisemaking alone, I will point to the inside deer to represent the deer that are outside.

Occasionally I take up my case again to assert that Cuda’s running to the deer was not a demonstration of his vocabulary, but a reflex: excited by the encroaching animals, he spontaneously performed a behavior that he does at other times of high excitement – i.e., when humans are looking at him and talking to him in enthusiastic voices.

My own childhood dog, while devoted to me, was not renowned for her smarts. This golden retriever spent one hectic snow-day afternoon barking in terror at the snowman my brother and I built in the front yard. On another notable occasion, in one go, Sandy managed to poop on every one of the fourteen carpeted steps between the first and second floor.

A malamute my parents owned when I was a toddler had a propensity for eating copious amounts of sand, resulting in an explosive trip to the vet that has become the kind of family lore polite mothers hate.

But the truth is that I know dogs are smart. Very smart. And the proof isn’t the stuff of heartwarming tales.

We often point out the ways dogs mirror our best human qualities – their apparent empathy and loyalty – while forgetting that we can also discern the worst of us in our canine companions. To me, their wily, sneaking lies are the strongest proof of their intelligence.

My former boss had a little dog that disliked going outside. Every time my boss shooed her out onto the grass, she took to relieving herself very quickly.

After awhile, my boss realized that her dog was not, in fact, relieving herself outside. As long as her human was watching, the little dog discovered that she did not have to urinate before running back inside. She just had to squat long enough to fool the human.

My boss watched weeks of these crafty dry squats before realizing what was going on.

My own snowman-hating Sandy was not as smart as Kallie, the Labrador retriever who preceded her.

My parents rarely argue. But I remember one frustrating week when I was in grade school. Each night, Mom would ask Dad to PLEASE remember to shut the door all the way when he left for work early in the morning. Dad would counter that of course he was shutting the door. Mom would point out that for the last few days, she had discovered the front door slightly ajar and Kallie out flouting the county leash laws.

What my parents failed to take into account was the recent installation of a new doorknob.

They had replaced this kind of doorknob: 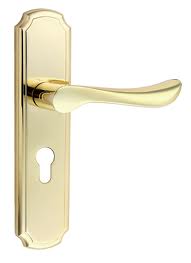 Kallie had realized that if she waited until after Dad left but before the rest of the family was up, she could open the front door with her paw.

So, near as I can tell, the dog

1)      Observed the mechanical function of the door.

3)      Realized the function must only be performed in secret.

But it was the Rhodesian Ridgeback, Briggs, the family dog in my teens, who forever sealed my confidence in dogs’ intelligence.

He was known for knocking the lid of his dog food storage bucket off to enjoy illicit snacks in the kitchen throughout the day. Once, when I was home alone and the house was particularly quiet, I heard the crunching from my seat in the living room and got up to banish him from the kitchen.

A long period of silence followed. Too much silence.

I snuck to the kitchen and peered around the corner unobserved.

Briggs was indeed back in the food bin. But this time, he took a mouthful of food and walked into the adjacent bathroom. From my hiding place, I discerned a faint crunching. I watched, astonished, as he returned for another mouthful and took it into the bathroom.

Dog-lovers buy pillows embroidered with the phrase, “My goal in life is to be the kind of person my dog thinks I am.”

Newsflash. Here’s what your dog really thinks of you: you’re eminently fallible and totally gullible. And he’s right.

Before I caught Briggs in the bathroom that day, I assumed his thought process, upon being discovered with his nose in the bucket, was (albeit not in linguistic terms) something along the lines of

I’m not allowed to eat out of the bucket.

In reality, he was thinking

It was the crunching that tipped her off.

In light of all this, who knows why my canine cousins took time from their busy schedule of licking, barking, and couch encroachments to stare pointedly at a man slicing strawberries.  But I do know one thing.

Has a dog ever surprised you with its smarts? Or its lies?