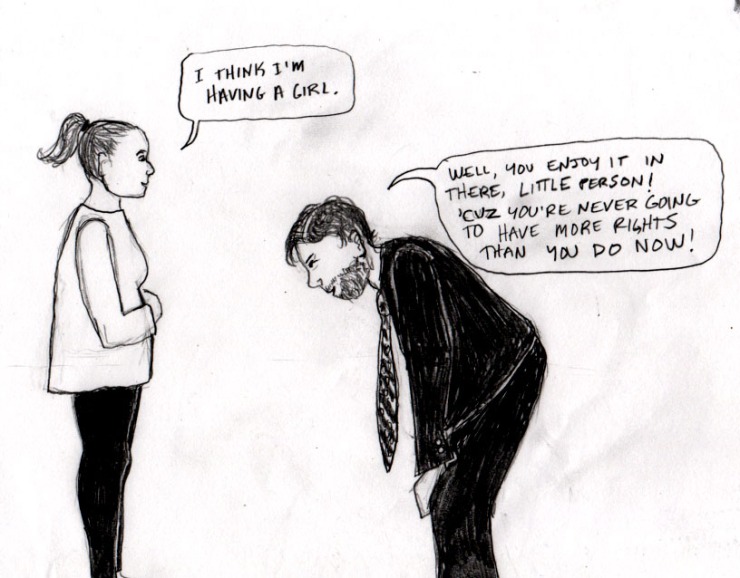 My parents always seemed to have stricter rules for me than they did for my brother. They seemed less worried about where he went and who he went with, and what time he came back. As a teenager, I realized the reason.

The world is a more dangerous place for girls.

One evening, shortly after I got my first driver’s license, I asked to take the car for an evening run to the local drugstore, a place I’d been going all my life with my parents. My parents consented, but stipulated that I take my younger brother with me, so I would be safe.

It was small moment, and I doubt anyone else remembers it. But to me, it represented an important and challenging perception shift, especially to the mind of an oldest child, used to greater responsibility at home. My brother had reached a level of adult mobility and security greater than my own, not because of maturity, but because of his gender.

To this day, my mixed feelings about this and similar decrees from my parents do not mean that they weren’t right. My work often requires me to walk around the city and take public transit alone late at night. When I’m waiting for the bus at 10pm and a drunken man weaves his way toward me, I would never object to having my brother there, but we live in different states now.

You can hardly go a month downtown without a cautionary news item about a string of assaults targeting women. I’ve seen purses snatched and I don’t listen to my iPod when I walk downtown anymore, lest I seem like a handy target. I often worked late at my former job, and I was supremely grateful to a male co-worker who, without being asked, walked me to my street-parked car after dark whenever we clocked out together.

The world is more dangerous for women.

I don’t usually let this fact get me down. I acknowledge reality, practice confidence and common sense, and accept help when I need it. Lately, however, I’ve been growing quietly distraught over a burgeoning risk to my safety as a woman – and not from lowlifes on the street.

The Mississippi “personhood” initiative, an amendment to the state constitution which is coming to a vote on November 8th, is among the most insidious political movements of American history.

In case you’re not familiar with the controversy, anti-abortion and anti-contraception activists have a renewed chance at a different avenue for their agenda: not specific laws which directly affect funding, clinics, counseling or medical practices, but a broad amendment to a state constitution that would redefine the legal status of the human zygote itself.

Initiative #26, if enacted by Mississippi voters, would redefine the term “person” to “include every human being from the moment of fertilization, cloning or the functional equivalent thereof.”

Lest you think this movement is limited to one southern state, according to a recent Bloomberg article, similar movements are gearing up in Ohio, Nevada, California, Colorado, Arkansas, Oklahoma, North Dakota, Nebraska, Alabama, Wisconsin and Michigan.

As some members of the population erupt with the ensuing legal ramifications of such an amendment, pro-personhood initiative groups pretend that the practical human implications are impossible to predict.

For example, a blog titled “Bioethics and Cloning: How Does Amendment 26 Affect Contraceptives and Cloning?” claims that the amendment “does not even attempt to deal with every possible scenario.” The legislature and courts “will still have to wrestle” with “some forms of birth control”. It’s a surprisingly ambiguous statement from a blog whose very title implies answers about the amendment’s impact on the availability of birth control.

The amendment’s likely impact on women’s access to contraception, including some forms of the pill, is a hot issue. But legal and medical professionals also worry about a range of other implications, including a ban on In-Vitro Fertilization and a total ban on abortions even in the case of rape, incest, or danger to the mother’s life, as in ectopic pregnancy. Under strict interpretations of the law, each of these procedures could be prosecuted as murder, with both treating physicians and affected women at risk of being arrested.

Perhaps worst of all, personhood initiatives are beginning to justify prosecuting women who have miscarriages or stillbirths. In June 2011, the Guardian reported on the Mississippi case of Rennie Gibbs, who in 2006 became pregnant at 15, but lost the baby in a stillbirth at 36 weeks. When prosecutors discovered Gibbs had used cocaine, they charged her with murder, though there wasn’t evidence that drugs had caused the stillbirth. She faces a life sentence.

Just this year, Bei Bei Shuai, a pregnant Indianapolis woman, distraught after her boyfriend left her, attempted suicide by taking poison. She survived with hospital treatment, but later gave birth about two weeks prematurely. When the baby died days later, Shuai was arrested and charged with murdering her baby through her suicide attempt.

These aren’t the only such cases, but they are sufficiently chilling.

In their urgency for the so-called sanctification of every human life, Amendment 26 supporters have handily forgotten that women are people too. It seems that the only female people with all of their rights intact would be the the ones who are still in the womb.

It’s easy to see some of the brutal intrusions into personal and family life if women are denied access to contraception and fertility treatments, if they cannot choose to end a pregnancy that is the result of rape or incestuous abuse, or if they’re denied the ability to preserve their own lives and health in the case of high-risk pregnancies.

But other sinister implications are also become clear in a necessary component of the Amendment supporters’ arguments, when they emphasize the separateness of mother and fetus to prove the fetus’s right to full legal status.

The website for Personhood Ohio emphasizes the biological distinction between fetuses and mothers, to propound the view that the issue should not, in fact, have anything to do with questions of a woman’s right to determine what happens to her own body: the fetus is not part of her.

“The new human being is not part of the mother’s body,” the website argues, because how could one woman have “male genitals, two brains, or four kidneys?” Instead, the “preborn human being” is merely “dependent upon the mother for nutrition.” It’s ironic that in forcing women to recognize a fetus as a legally protected person with rights equal to her own, advocates simultaneously perpetrate a systematic denial of a mother’s ideal connection to her fetus, as she becomes a mere vessel for the baby’s “nutrition”: there is no mention of the mother’s symptoms in pregnancy, or the lifelong sense of identity that may be entwined with motherhood.

This reminds me of nothing so much as a tidbit which crossed my hearing years ago about the history of our understanding of conception and pregnancy. Until the late 19th century, no-one yet understood that conception begins when the sperm enters the ovum. Prior to this, one theory actually held that tiny, fully-formed human beings were contained within sperm, which were then implanted to grow in the female’s womb. In other words, men alone are responsible for creating a new person – the woman is just needed to carry it.

I believe that the implications of Amendment 26, and similar developing amendments, demean women in a similar way, not only stripping them of a necessary sense of human autonomy, but minimizing their role in the birth of their own babies.

According to Personhood Ohio, the personhood debate is not about “personal autonomy”, “women’s rights”, or even “what’s most beneficial to women”. Why are a group of people subjected to terrifyingly methodical denials of their own personhood expected to rise up in empathy for the primacy of someone else’s personhood – especially when the personhood in question is buried, invisible, inside the dehumanized women’s own bodies?

Since I was a teenager, I knew that life might hold more practical dangers for me than for my brother, simply because of my sex. At the Christian boarding academy we both attended in high school, boys were given lax curfews and snuck out with little fear of reprisal. But the girls lived by the clock, facing punishments like being confined to the dorm if they were a few minutes late for any reason.

“Why are the rules so different for the boys and the girls?” I complained to my friend in the boys’ dorm.

“Well, the boys aren’t going to go out and get pregnant,” he replied.

I’m sure that’s not how the official policy was worded. But as a high-school dorm student and as an adult woman, the reason I was subject to harsher rules and the reason modern legislators see fit to deny my rights do seem to come down to what my friend said all those years ago.

I can avoid walking down dark alleys by myself when I’m downtown. But I never imagined that the dangers to me as a woman would come from so many quarters, including a statehouse where attendees chanted “Amen” to the announcement of Amendment 26 (on Halloween night – how appropriate). If this or similar measures are carried by voters in the coming years, the United States will become a dark alley which no woman can exit, and no brother or parent will be able to protect her.